The latest crypto token on the web, MetaMAX, is popular with online trading influencers across social media platforms, especially YouTube. Is MetaMAX really the latest cryptocurrency that’s going to the moon, or is it another pump and dump scheme, that will leave you out of pocket? Is MetaMAX trying to become the new SafeMoon?

According to the MetaMAX website, it describes itself as offering “unparalleled growth potential and consistent, stable rewards with a community dedicated to the project’s long term and ongoing success”. It goes on to claim they are “The most secure and trusted Cryptocurrency P2P system”.

MetaMAX proudly displays its goals on its website. These include the company’s mission, vision, and strength. They showcase their ‘influencers’ who have promoted the MetaMAX token (as of today, they have 4 influencers shown on their website).

MetaMAX is proudly promoted on YouTube, particularly by ‘BLW Online Trading‘, owned by a Guatemalan content creator called Cristian Emmanuel Argueta Pedroza, and ‘Sit On My Bits‘, owned by Paul Byman, a Briton residing in Spain. These YouTube channels are primarily affiliate-based, meaning they only promote products where they’ll receive a commission (BLW Online Trading also promotes their own products). However, both of these channels do not promote MetaMAX with any affiliate links.

These content creators, and their affiliation with MetaMAX, are discussed later. 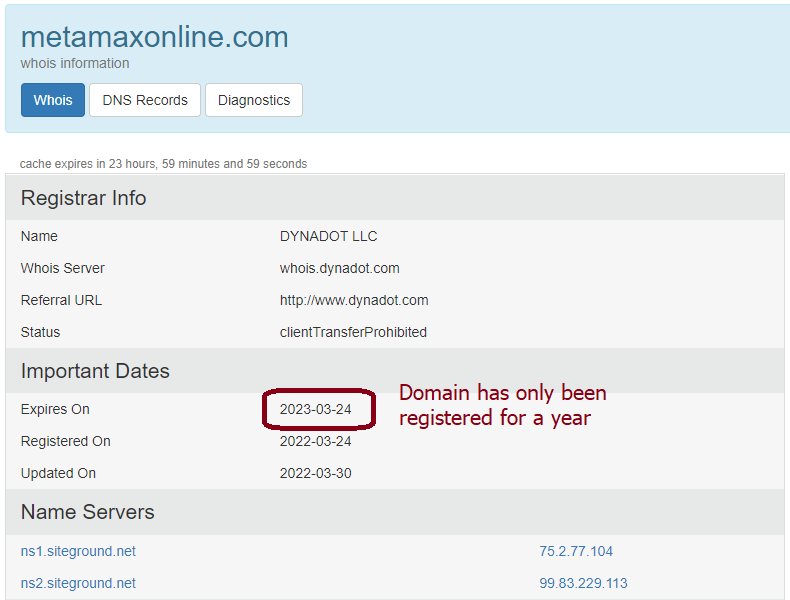 It’s uncommon for websites within the trading/crypto/financial market to only register their domain for a measly year. Compare this to other token companies, who tend to register for a minimum of 2-3 years. The fact that MetaMAX has only registered its website for a year gives an indication of how long they are planning to ‘exist’ in the crypto field.

The MetaMAX website features their so-called ‘Team Members’, who are shown below:

Notice anything strange? There are no surnames, nor links to LinkedIn, GitHub or any professional profiles.

The images do not show any results when put into a reverse search. It is possible that they were created with This Person Does Not Exist, a website which creates faces using AI technology. However, one thing that is worth mentioning is something we found with the profile picture for ‘Jonathan’. 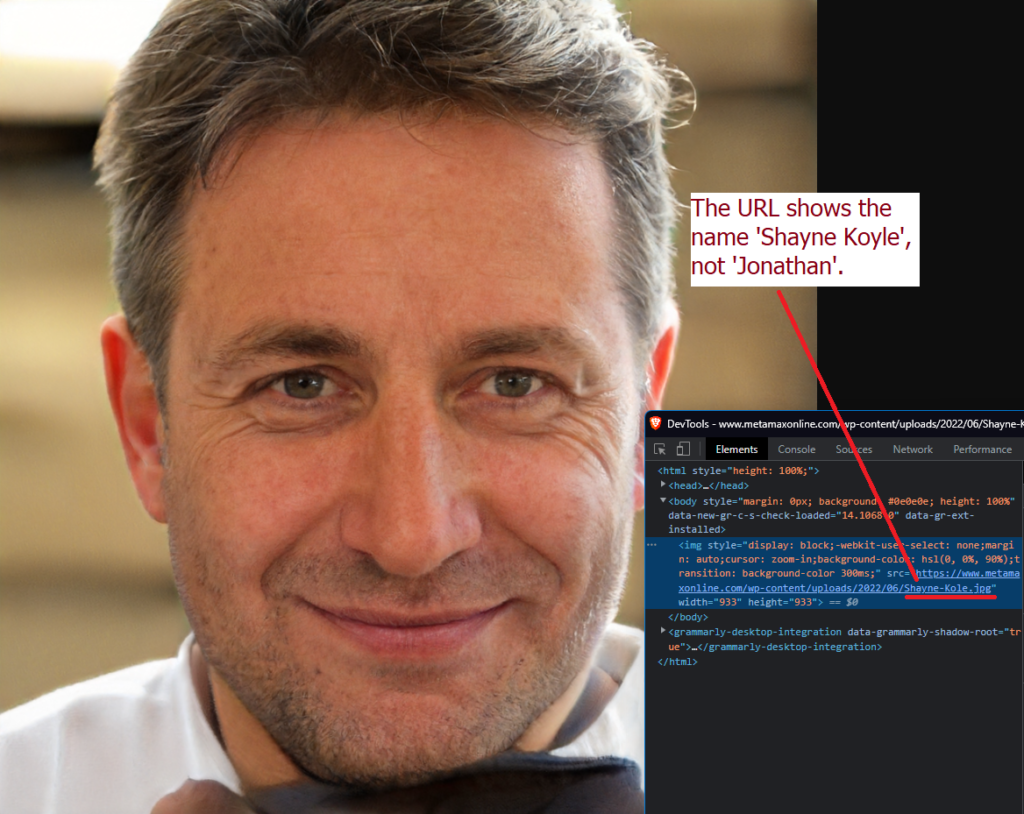 The photo URL shows the name of ‘Shayne Koyle’, not Jonathan. Either this is a mistake, or, more likely, the photo has been taken from a real ‘Shayne Koyle’ and used on MetaMAX’s website.

An audit of MetaMAX has been completed by DAudit, and is available here. Their audit has some flaws which pose a huge risk to MMAX token holders.

The most critical issues are shown below. They are fairly self-explanatory. 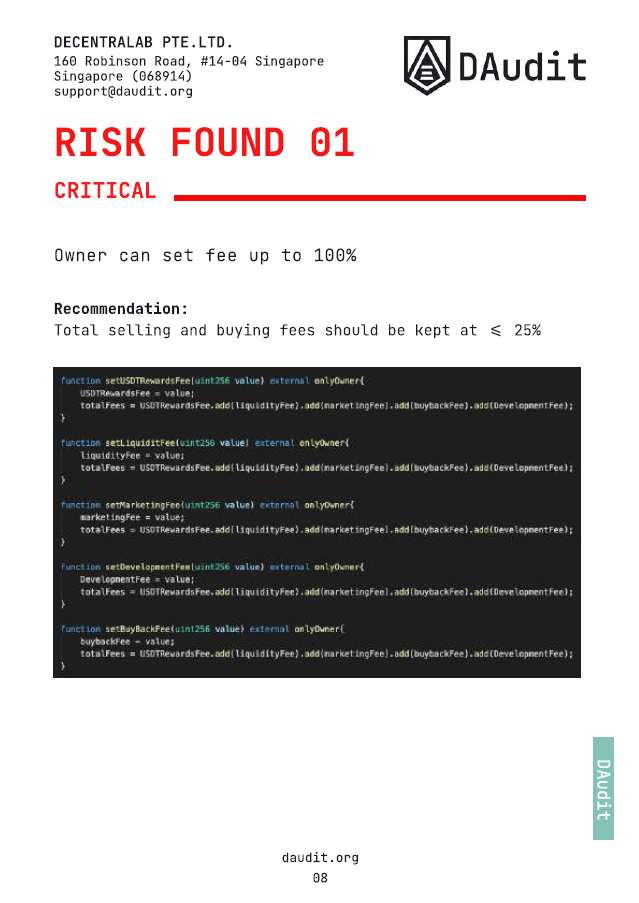 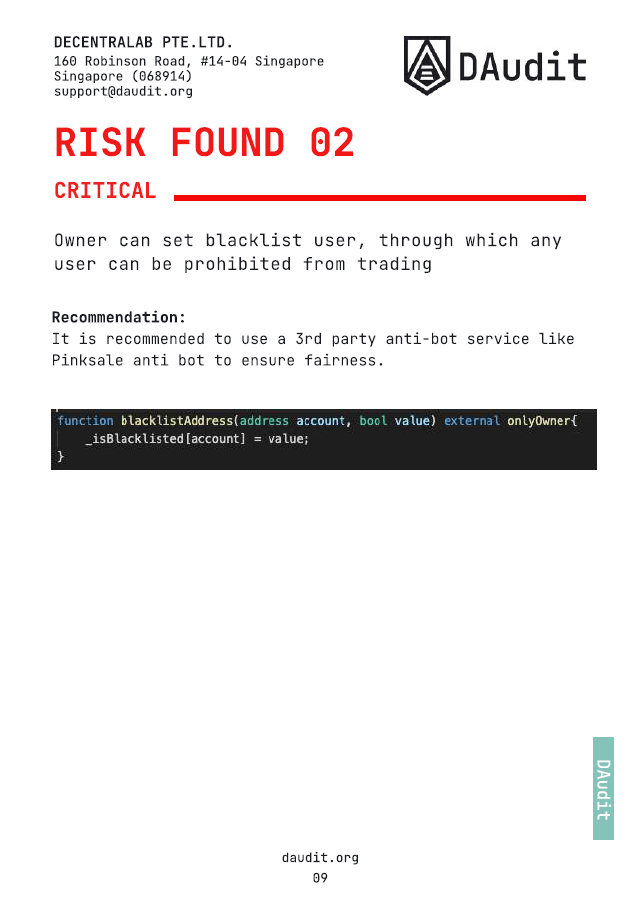 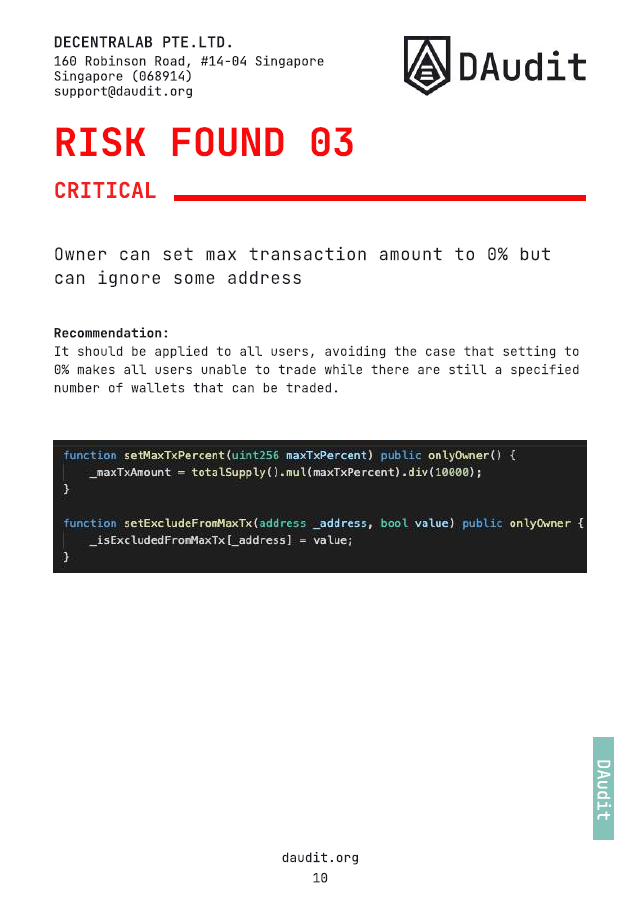 To summarise the findings within the audit of MetaMAX, it shows that the owners (whoever they may be) have the ability to set the buying and selling fees to 100%, blacklist users from trading, and set a maximum transaction amount of 0%. This puts the owners in a position where they can wipe the value of the MMAX (MetaMAX token) via inflating transaction fees, block holders from selling, and prohibit transactions.

These are extremely critical flaws within MetaMAX’s code. As of now, it’s set up to have the ability to rob all holders of the MMAX coin.

This is pretty self-explanatory too, but the official Twitter handle for MetaMAX has been suspended. It’s difficult to decipher out why, but if any new information comes to light, you’ll find this section updated. 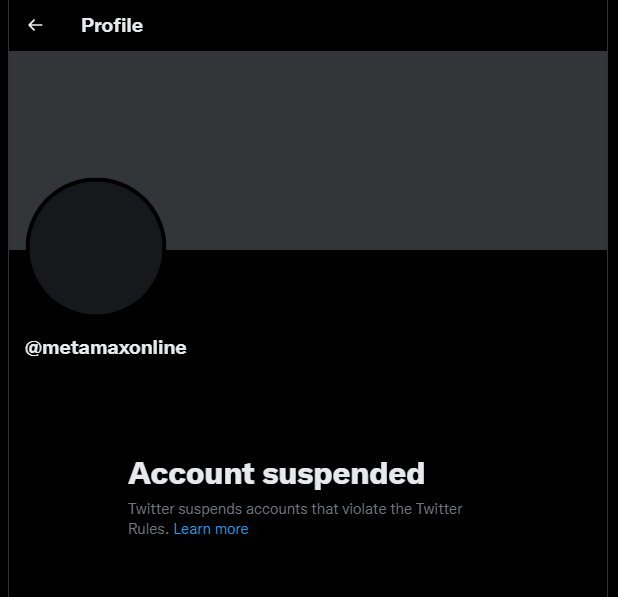 No Company or Partnership Incorporated

MetaMAX is not part of any company, partnership or corporation. Their website, terms, and privacy policy do not mention anything of the sort. This even includes offshore registered companies. The lack of transparency in this area gives a red flag as to who is actually behind the MetaMAX token.

MetaMAX proudly boasts its promotions from influencers on its homepage. The influencers showcased are:

We approached each of these influencers directly. Not to question them about their affiliation with MetaMAX, but to simply enquire regarding promotions. We were quickly responded to, by either themselves or a representative agent, who wanted to discuss pricing. So, based on this, we can confirm that MetaMAX has paid these influencers to promote their token.

Whilst paid promotions aren’t always a bad thing, do you notice anything common with all of these influencers? The majority are all from, or residing, in South America. Now we aren’t being discriminatory, I promise, but allow us to explain this further.

Here’s the list of the MetaMAX featured influencers, this time with their country:

With the exception of Ehdson, who in this case is the ‘red herring’, we have got the majority of influencers based in South America. Plus, all of these influencers are based on TikTok or Instagram.

Let’s turn to YouTube. As I previously mentioned, there are 2 main YouTube channels promoting MetaMAX – BLW Online Trading and Sit On My Bits.

I only want to briefly mention Sit On My Bits. It takes just 1 look at the YouTube channel to decipher that the fair majority of products and platforms that are being promoted by Paul are fake. Paul has his comments disabled on all videos in an attempt to hide people calling him out, plus he fails to disclose he is using affiliate links.

Basically, anything on Sit On My Bits has a 90% possibility of being a total fraud. There will be a post about this channel in more detail soon.

So we’ve got Sit On My Bits promoting the life out of MetaMAX, which is one clear indication that this is a scam token. Let’s move on to BLW Online Trading. Cristian is based in Guatemala and owns the company Grupo BLW SA.

Let’s put the puzzle pieces together.

This is obviously speculation but it does make sense. BLW knows full well how to make financial products (he has a large collection of his own software). Plus, he has recently promoted products which have ‘exit-scammed’, including COPTS and Metafi Yielders. As for Paul from Sit on My Bit’s part in this, it’s possible they are partnered up to gain as many token holders as possible.

We cannot say anything for sure yet, but we are actively investigating who is behind MetaMAX.

Our investigation into MetaMAX indicates that this is a scam. The audit is the main indicator that shows the owners of the token are at an extremely high risk of losing the value of their MMAX balances. Not to mention the lack of transparency behind the company or individual